Wherein Fisherhubby Crosses the GREAT Divide, and Other Friday Frags

.
It's Friday - the day when we can take bits and pieces of our fragmented lives, weave them all together, and create a beautiful tapestry.

Several weeks ago we bought a carpet shampooer when it was on sale. Fisherhubby, ever the lover of gadgets that have a motor and make noise, proceeded to shampoo the carpets.

They looked SOOOOO much better I decided to put down a few more "runners" in the high traffic areas in an attempt to KEEP the carpets clean - er.

I asked Fisherhubby if he would please try to step from runner to runner, especially when he comes indoors with his honkin' big HUNTING and FISHING boots on.

I got no response.

However, a few days later I heard a huge THUD followed by my china cabinet rattling and quaking. I thought every dinner plate in there was going to be fragmented.

I looked up to see that FH had JUMPED from runner to runner - - - like he was leaping across the Great Divide. 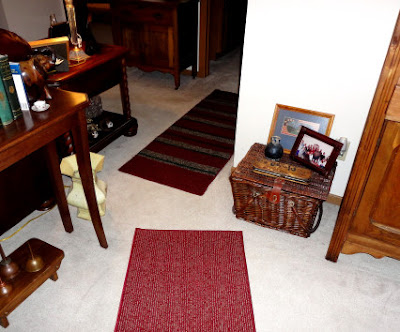 He said it was too far for one step, and besides the chasm was way too deep and he was afraid for his LIFE unless he did the standing broad jump.

Even after nearly 37 years of being married to that boy, I STILL never see these things "coming" ahead of time or I'd give FURTHER instructions.

Not that it would help one bit.

Earlier this week visitors to my blog played a rousing round of "One of These Manni's Just Doesn't Belong Here." If you missed it, go play real quick before you scroll down any further in this post.

I'm about to reveal the answer so you'd better go play BEFORE you cheat!

EVERYONE who played got the RIGHT answer. And for a prize they all get the satisfaction of knowing they were right!

I can tell you now, I was HOPING everyone would get it right 'cause to me it was obvious, and if you thought I dressed the Manni who didn't belong there, I was going to feel tasteless.

Of course, I probably AM tasteless, but that's beside the point.

Have I filled up enough blog space yet? Were you able to go play the Manni game real quick WITHOUT cheating and seeing the answer???

The answer was of course, Manni B.

Sister Pam said B was for Beulah - - - our mom - - - and you know, I think mom did wear some dresses quite similar to this one.

The MAIN problem with Manni B is whomever dressed her did NOT know the secret of the clothes pin. 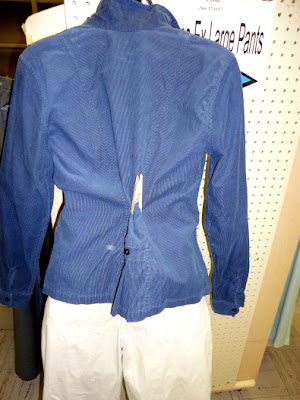 The manni's tend to be about 10 year old size, so clothing just HANGS on them and it "ain't" purdy. 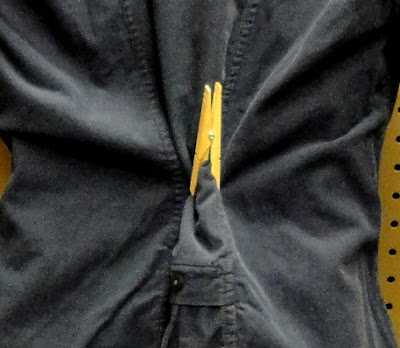 To compensate, I use a clothes pin or two on the back to make the outfit "conform.: 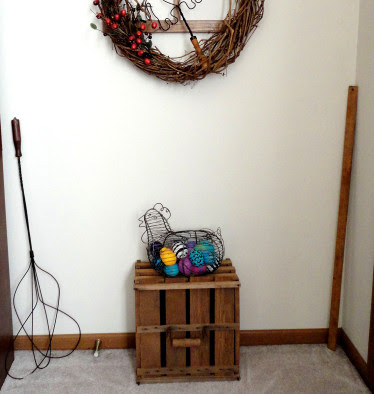 I finally got some "fake" eggs to display in my wire chicken egg basket today.

These are NOT what I really want - - - but they'll do nicely until after Easter.

What I REALLY want are some natural fake eggs. HA - - - an oxymoron, but think about it and you'll know exactly what I mean. 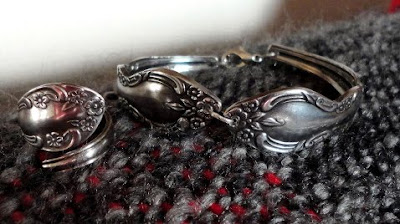 Found some REAL spoon jewelry today. I've had "imitation" spoon rings for a while now, but I wanted the real thing. 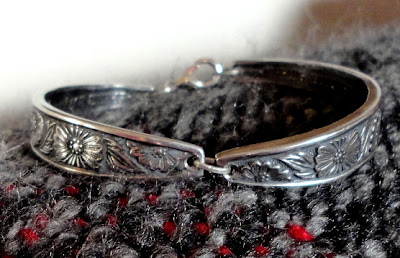 They had matching bracelets! I'd never seen spoon bracelets before, but I LIKE them. 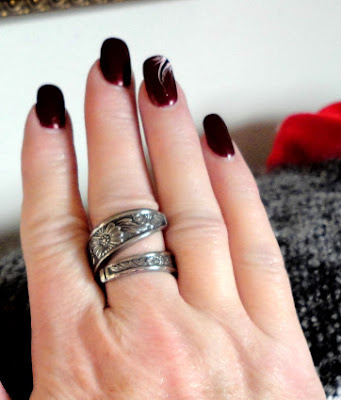 So, I went a little wild and crazy with the checkbook and got two sets. 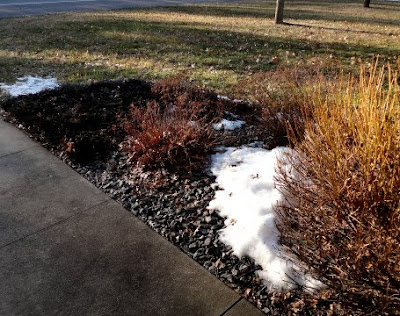 This is all the snow we have left - - - well, this small patch and others about like it scattered around the city.

Last year at this time we were still under more than a foot of snow, and it was so cold it hung around well into April. Our LAST flakes flew in May.

The weather gurus say we're gonna nearly hit 70 next week, so this is bye-bye to the white stuff.

That's NOT to say we couldn't still get another sizable snowstorm. March is FAMOUS for those.

Now please head on over to Mrs. 4444's place
And check out all the other Friday Fragments.

Ha! I love being right and it happens so seldom!

Your husband cracks me up! But wasn't that sweet to want to do what you asked??? I once asked mine to take off his shoes before coming in the house explaining that 85% of household dirt comes from shoes! He said and I quote.....no. :)

We have a no shoes rule...it works pretty well. We even found a little pair of snowshoes in alaska that says "please remove your shoes" that we hung by the door. I love your egg basket :)

Hehe leapfrog. That's so something one of my kids would do - and in this case I'll include my husband in the kid classification. I'm pretty strict. If you're in my house and not a guest you darn well better NOT be wearing shoes! Now if I could just get the dog to wash her paws before she comes in...

The spoon jewelry is so pretty and so are your nails! At least you got some snow! Yes, I'm still complaining about no winter here in the low-country of SC. I'm going to have to give in and turn the AC on. Dang it.

The runner to runner jumping would definitely occur in my house too. By the large child AND the small child. :)

First off, I read about Peyton a bit....I just also read that he was in Denver talking with the Broncos [my favorite team]...whoa...I never saw that comin'!!

Okay now to your fragments. I tellya, I had a good laugh with fisherhubby doing the broad jump across the great divide! And you've been married for 37 years? Well now, he seems to be quite agile at his age then. More power to him...or should I even mention the word "power"...he may go buy him a new gadget. [kidding]

so there you go, we are all winners or got it right. Shows that we get to know you through the blog. Good pun there with the pincher .... and since I wanted pastel looking eggs I got some CHALK eggs, yes, and put them in a bowl every easter. They seem to work well. At least IMHO.

Ooh, a carpet shampooer. I would love to not have to rent one.

Ugh! I feel you about the weather, it's been in the low 80s here. I'm done complaining and trying to accept and deal with it. After all that's why people actually live here in California. The sun.

I love the eggs in your wire chicken and the header picture you have up right now. I am impressed that your hubby actually tried to follow your instructions.

The snow you have left is more than we've had all winter! Too funny about FisherHubby!

Hahahaha!!! See! Your story still made me laugh. I love that silly father of mine! :)

I like Aunt Pam's answer!! Very clever. And true!

You will never run out of funny blog material as long as FH draws breath! I really like your Easter eggs in your wire chicken basket, too. Very festive.

Oh my goodness...that is too funny about Fisherhubby! Love the spoon bracelets. I haven't seen those before either.