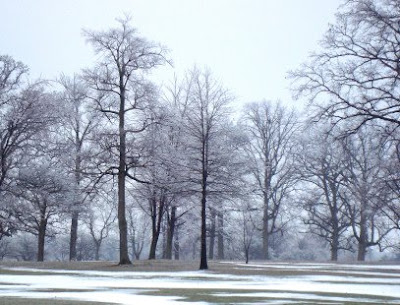 By Friday morning, the icing that had been collecting on the roads, bridges, and my back deck, had begun to adhere to tree branches. On top of the ice, hoar frost had etched the stark, black tree lines with fuzzy white.

Hoar frost is actually fog that has frozen to the surfaces which it touches. I've seen much more spectacular results than what I am showing here - - - but this was our Indiana version on Friday morning.

I do rather like the photo as you can still see remnants of the culprit fog amongst the trees. 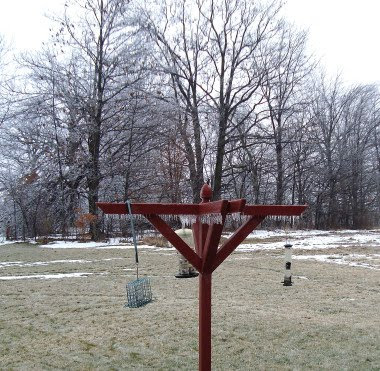 Some of it is ice, icicle fringe adorning the most mundane of everyday objects, causing them to glitter. My deck railing was also gaily decked - - - pun intended - - - with the sparkling garland. 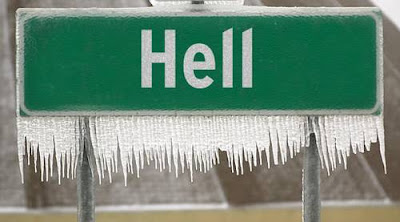 (photo from thepeoplescube.com)
When Hell Freezes Over

Growing up in the frozen tundra that was Hayward, Wisconsin I often heard the phrase "Hayward, Hurley, and Hell!"

Everyone in the area knew that this phrase harkened back to early logging days when Paul Bunyan and his cronies would come into town on Friday night to partake of the bawdy pleasures to be found there. I was told that it referred to the three wildest towns in the region - - - Hayward and Hurley, Wisconsin and Hell, in the U.P. of Michigan.

Today I spent some time googling the origins of "Hayward, Hurley, and Hell."

I found some very interesting facts.

First - - - if one hails from Hurley, he does NOT say "Hayward, Hurley, and Hell." HE says "Hurley, Hayward, and Hell." Of course, in MY opinion he has the order WRONG - - - putting himself in the FRONT position - - - but later the order will be significant - - - hang on for the ride.

Second - - - The only current Hell I could find in either Wisconsin or Michigan is in Michigan, but near Detroit - - - which is far removed from the northwoods logging area from which this phrase originates. Thus, it could NOT be the Hell intended in the phrase.

Third - - - gangsters, like Al Capone, came to the northwoods from Chicago to hide-out and enjoy the lakes of the region. They added to the "bad boy" reputation of the area.

Fourth - - - several different and varied sources (including my own memory once I READ this elsewhere) site that the phrase, "Hayward, Hurley, and Hell" originated from a train conductor calling out the upcoming stops and that furthermore it should ACTUALLY be "Hayward, Hurley and hell" because hell did NOT refer to an actual town on the railway line, but rather to the degenerate state of affairs in Hayward and Hurley.

My guess is that the phrase SHOULD be "Hayward, Hurley, and hell." My evidence upon which I BASE this conclusion is as follows:

*Lack of evidence showing the existance of either a Hell, Wisconsin or a Hell, Michigan in that area of the northwoods.

*The cloud of wickedness and degradation that hangs over the history of the area from both the pleasure seeking loggers and the law avoiding gangsters.

*And now, my piece de resistance: If these were all three towns, and if they were called out by a train conductor as being final destinations then the ORDER is very important. He could NEVER have called out both "Hayward, Hurley, and Hell" AND "Hurley, Hayward, and Hell" for if Hell were a town, it could NOT simultaneously exist at BOTH ends of the route. The ONLY way the phrase could have had both Hayward AND Hurley in the starting position would be if Hell were in the middle.

Which perhaps it was - - - figuratively speaking.

Now, lest I have sullied the reputation of these fine towns (granted, I know NOTHING of Hurley personally though I ADORE spending time in Hayward) let me share this little Hayward fact with you:

Today the Light of God's Word has penetrated the northwoods in an awe-inspiring manner. My friend, and fellow blogger, whom I like to call "The Little Pastor in the Woods" - Mark Wilson - is pastoring a "little" church in Hayward that in the summer averages between 700 and 800 people on Sunday morning - - - this in a town whose population is just over 2,000. 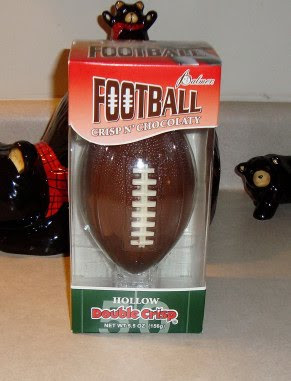 My Night From the Place That Froze Over

I really should know better. I've had enough experience to have LEARNED better. The only conclusion I can draw from THIS evidence is that I'm brain-dead.

I am one of those lucky people who experience acid reflux - - - repeatedly.

I KNOW that eating sweet things LATE AT NIGHT is a sure fired (oh, and all you fellow acid sufferers KNOW that was a pun) way to spend a miserable night. Miserable.

So, why did I sit home alone last evening, Fisherhubby was at work, and CONSUME this entire chocolate football at about 9 PM?????????

The only conclusion I can come up with after my night of misery is that besides being a pig, "oink oink", I am also indeed brain dead.

Oh that chocolate late at night is a guaranteed horrible reflux episode! I had one last week, ick! When will I learn!

I had never heard of hoar frost - but I've seen it! I've also been to Hell, MI - but as you stated, it is not in the U.P. of Michigan. Late night chocolate gives me terrible heartburn, too and I would have eaten that who football, too, given the chance LOL

I have heard of hoar frost, but did not know what it was...thanks!

The reflux comes from not enough of the GOOD chocolate. I have absolutely no problem with after breakfast, lunch and of course midnite snack...ummmm...ummmm...good & just hope I don't forget where it's all hidden!!! Twenty-ten has so far been very good to ME!!!!

Hasn't this been the hoariest frostiest winter? Fog, clouds, ice, fog, clouds, ice...day after day! Thank God for the beauty of these trees and football!

Speaking of chocolate...my feet hit the floor as soon as eyes open, knowing there is delectable treat just waiting for me to devour in my comfy robe & slippers with freshly brewed coffee. Wish you here and I would share one with you!!!! I did hide them behind empty bowl designated "chicken liver" knowing they will be perfectly safe. Come & enjoy one...but better hurry!!!

My dad told me about hoar frost years ago & it was always my favorite winter occurrence.
Hayward, Hurley, & Hell -- we can only imagine the episodes that lead to the saying.

GREAT post! GREAT pictures. I had enver heard of hoar frost. But I have thought hell might freeze over a few times.....