Village People in My City

.
My friend Eloise, (pronounced E-Lois) has a cute little village of houses above a couple of door frames in her home.

I always admired them, and dare I say it, maybe even coveted them.

One day while at a yard sale, Eloise spied another set of the same type of houses.  She promptly bought them and presented them to me as a gift.
.
.

Now I too have a village above the door frames on one side of the main living area of our home.
.
. 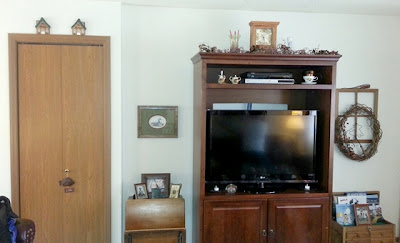 About a year later a couple of little wooden houses came through the Shepherd's Loft where I volunteer.  I held them in my hands and thought about taking them home for my village.  They were, however, a much more country design and ultimately I decided they wouldn't blend with my village and didn't bring them home.
.
. 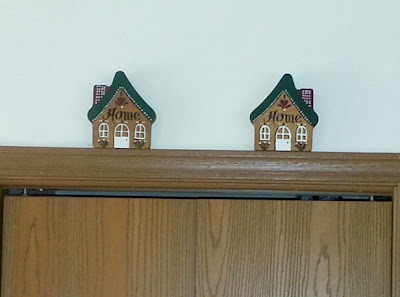 A few weeks later a lady came into the Loft and picked up the two little country houses.  She had them in her hands ready to put them in her shopping cart when I passed by.

As encouragement to her I said:  "Aren't those cute? I noticed those too and thought they were really cute."

She turned and thrust them into my hands saying, "Then you take them.  I don't need them and I want YOU to have them."

I could tell she was trying to give me a gift and that it would be unkindness itself to refuse.  So I thanked her and took the houses home where I put them above the door on the opposite side of the main room.

I thought - I have the village people on one side and the country cousins on the other.
.
. 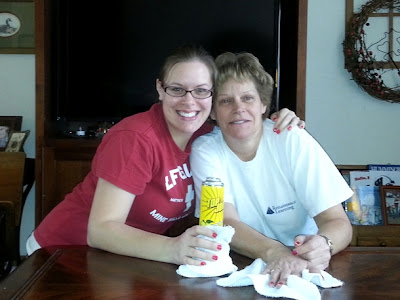 Now for the REST of the story:

The next time my very professional mother-daughter cleaning duo came over they spied the country cousins and began to giggle.

Seems Mary, the mom of the duo, had donated those to the Loft.  At one point in their history she and Sara, the daughter of the duo, had repainted the houses into their current burgundy and green color scheme so there was no doubt whatsoever in their minds that these were indeed the same houses.

And to make this even better, Mary and I have been friends since she was a little girl.

I'm joining Unknown Mami
For Sundays in My City.
.
My city is Wisconsin Rapids, Wisconsin
.
Please hurry over to Unknown Mami's to see
What's happening in other cities around blogland.
.
.
Posted by Keetha Broyles at 8:22 AM

That is so funny! I haven't seen any of these houses but will now be on the lookout! Hope your throat is feeling better.

I love coincidences like that! Life is fun that way! And these little houses are very cute! Enjoy your day, my friend!

How fun! It takes a village to make a village.

It's a small world even in a little village world!

Thanks for inspiration for a future post. Hondurans love miniature houses, and almost every country home as a small home at the entrance. At Christmas, miniature villages are much more in vogue than Christmas trees. Love it!

If you are a really good girl, I could be persuaded to buy a small adobe Honduran homemade house for your collection. They are adorable. The tundra needs a touch of tropical.

Talk about coming full circle. What are the odds of that happening again! The houses were meant to be in YOUR house :-)
Happy SIMC, jj

I am glad the houses landed in such a fun and loving home.

Don't you love it when things like that happen? I call it a wink from God. Just amusing, and now you have a second story to go with your country cousins. You won't want to let them move away any time!

'Walking with a friend in the dark is better than walking alone in the light.'
Helen Keller
Have a good week!

It is always a small world.

What a sweet addition to your home and filled with significance.

What a fun story! I think they were meant to be yours! So glad you are back with us.

Now that is hilariously wonderful.

Love that story and love those houses.

That is a great story :) Cute!

I think Podso is right. That's proof that God has a sense of humor!

What an awesome journey those little houses took to get to your home. Seems like a blessing to me.
:-)
Traci

Well, this is just a great story and what fun to share with everyone that comments on your "houses above the doors." Happy week!

This might be just as funny - a friend of mine bought a dish at Goodwill to match one she had at home. When she got home, she couldn't find it. After weeks of searching, she asked her husband about it and he told her he took the dish to GW - SO, apparently she bought back her own dish!!