One of "My Boys", Russell Wilson, Makes Good

.
If you are a new reader here, there is something I just really need to tell you.

I AM A COLLEGE FOOTBALL FANATIC.

No, I don't just follow one team, although "my" team is Wisconsin. On Wisconsin!

On any given Saturday in the fall I will be found in my football cave watching up to 6 college games at the same time. I doubt any of the sports pundits watch any more college games than do I.

You'd be amazed how much of each game you can catch switching channels at commercials and time outs. 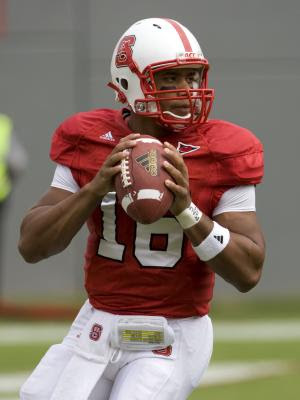 Three falls ago, long before the sports pundits noticed him, a young quarterback at NC State caught my eye. His name? Russell Wilson

He could do it all. He could pass long and accurately, he could run, he could even catch and make yards after the play. He was smart.

I thought, "Man, I wish we could get a QB JUST LIKE HIM at Wisconsin. 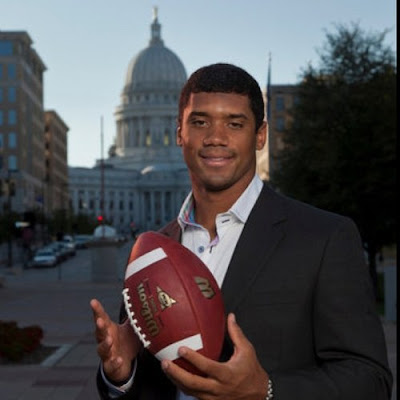 After I had watched him play for two years at NC State, he graduated with a year of football eligibility still left and announced he was going to transfer to enroll in a master's program and play football for another school.

He narrowed his choices down to Auburn or Wisconsin.

I could hardly believe my ears!!! But I thought, "he'll pick Auburn. They just won the national title so he'll want to go there."


Just imagine my joy and glee when he choose Wisconsin instead!!!!

To Wisconsin he came. He learned the Wisconsin offense in two weeks and was elected one of the captains of the football team before he ever set foot on the field to play one game.

He gave us a season full of brilliant quarterback play culminating in helping us win the first ever Big Ten Championship game - - - and I watched every single down, every single throw, every single TD pass and run.

I have seen only great things from Russell Wilson. 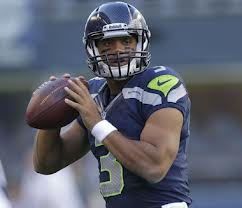 Then came the NFL draft.

The "experts" said he was too short. (He's less than an inch shorter than Drew Brees and we all know how Drew Brees has turned out, right?) I heard Mel Kiper and Jon Gruden engage in a verbal battle over Russell's height issue. I'll just say I agreed with every word Jon Gruden said and I wanted to punch the other guy in the nose. How dare he criticize "my boy!?!"

Well, Pete Carroll must also have been watching Russell because much to the dismay of Mel Kiper, the Seattle Seahawks drafted Russell mid third round.

Jon Gruden and I cheered our hearts out.
They don't show many Seahawks games in Central Wisconsin but I have the NFL network and they have been replaying all the preseason games.

I've been taping the Seahawks' games and I've watched Russell's every play - - - every pass and every run.

I gotta tell you - - - he's been out playing Matt Flynn, brought in by the Seahawks from the Packers to, presumably, be the starting QB this fall.

And I've been cheering on his every move.

In this case, the Seahawk management is waiting to see how Russell plays Friday night before naming their starting QB for the season.

I can already tell them how he'll play. He'll play with the same heart and skill that he ALWAYS plays with.

Russell, I'll be watching and I'm in your camp. I couldn't be prouder of you if you really were "my boy." Go show 'em what you've got.

Wow! Your boy has done a great job! Hope he is the starting QB~~ hugs, Linda

Glad you like football so much because you cover for me because I don't like it. Sorry! Everybody has their own thing. The only thing I like to do at football games is check out everybody else!
P.S. I am going to burn that ugly outfit! :-)

You should become a sports writer for the UWisconsin fan sites. You are very good at telling the story. Its a positive one too of a kind with smarts, talent and drive.

Thanks for that great update on how Russell is doing! I'm not as proud as you are, but anytime Mel Kyper is proven wrong is a happy day for me.

I know that is mean, but it isn't as though he'd ever admit he was wrong, is it?