Yesterday I gave a little hint about what we were up to, and of course those of you who happened to respond knew right away that we were at the beach. My hint was none too subtle. Hehehe 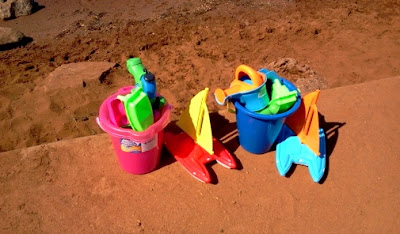 We spent a hot afternoon at Red Sand (wonder HOW they got the name) Beach on Lake Wazeecha.

This was a favorite summertime haunt of Sister Pam's, our friends', and mine when we were in high school.

I love it just as much today as I did then.

Meanwhile, back at the blog post - - - here's what we DID at the lake shore yesterday: 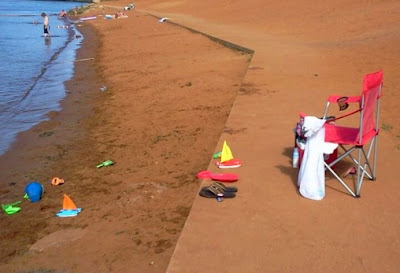 ONE of us sat in this red "camp" chair (except for a brief wade or two into the cold water for personal climate control) the whole time casting a guardian eye over the diminutive swimmers. 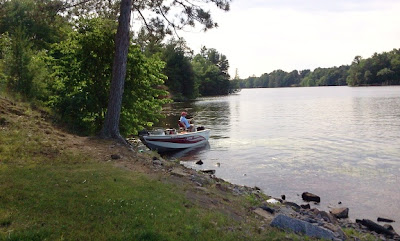 The OTHER one did this a few yards up shore from us. Hardly surprising is it? 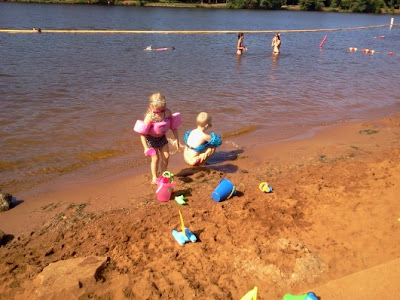 The diminutives did a bit of digging in the carrot-red sand. They tried a roll or two in it until Kamma, fearing their skins would turn a permanent orange shade yelled: STOP!!!

(Mama, their "babin' suits" will never be the same. Good thing they weren't brand spankin' new THIS season!!!) 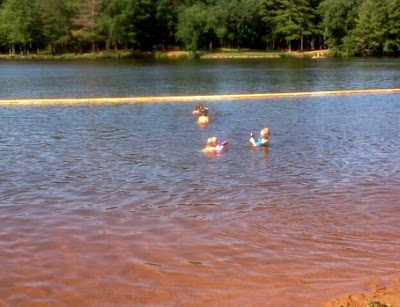 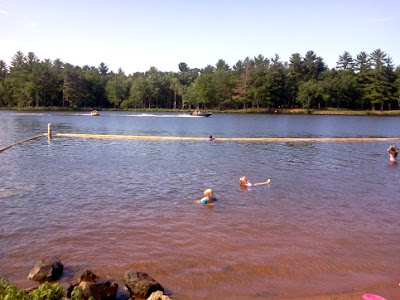 They even paddled and floated around. Pipes is especially adept at the whole floating thing. 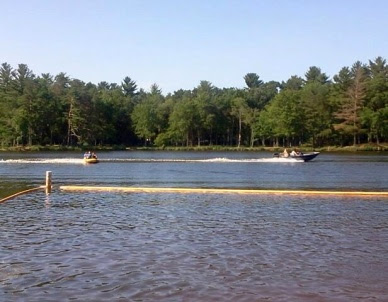 Other lake goers weren't content with shoreline activities but preferred to zoom by, creating surf in their wake. 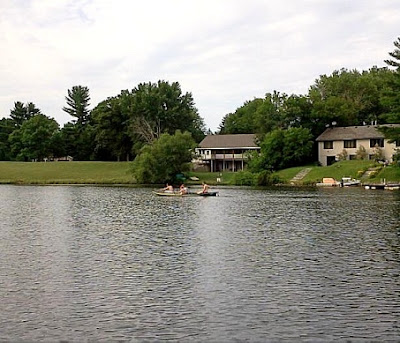 While still others opted for a slower, gentler, quieter paddle-by.

I've had my eye on the kayakers. I may put a kayak on my bucket list of things to acquire someday. 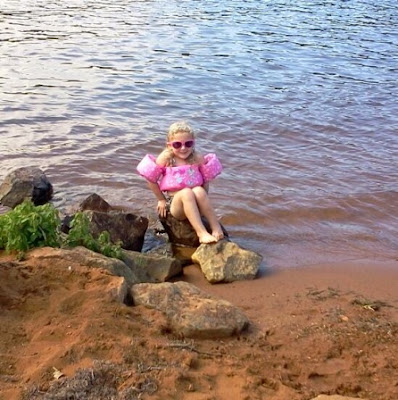 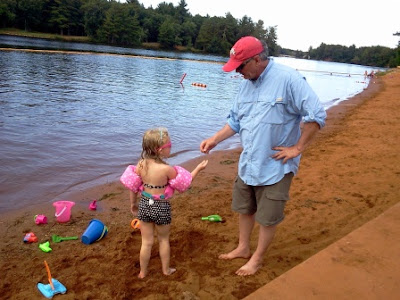 And after a long, slow, deliberate pause Papoo would say: "That is a ROCK"

This went on time and time again.

Cheer up mama and daddy - - -
a WHOLE collection of lovely rocks are coming home!!! 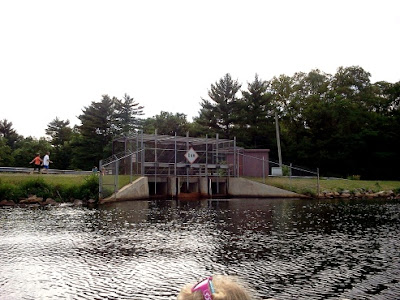 The dam that makes Wazeecha a Lake instead of a gentle stream. 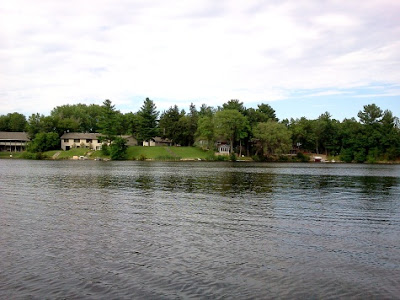 We made up our own version of "Oh Once There Were Three Fishermen" which we sang repeatedly as we trolled around the lake. 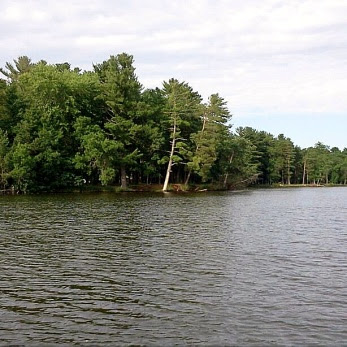 And they all went down to
Wuzzy Wuzzy - CHA CHA CHA!!!

Posted by Keetha Broyles at 9:36 AM

If you come to SW Missouri, I will personally take you kayaking. :)

Keetha, it is such a joy reading your post. You make them so fun. I can see why fisherman stays on the lakes. You are one crazy lady.

Love your version of "Oh once there were..." Looking at yesterday's picture, it was obvious that you were at Red Sand, and I had to shake my head over your choice of clothing. Today you are saying that the kids' bathing suits will never be the same; what about your capris?

I never thought I'd say this, but much as I loved my dear granny, I'm pretty sure you are more fun as a granny.

Never once did my grandmother lead me on a rousing round of "Oh, once there were....." Making memories!

Fun post!! It made me laugh. I'm just SURE "mama and daddy" will be THRILLED with the lovely rock collection. I'm glad Papoo is SO smart to identify them for Piper.

Looks like there was lots of fun going on! I too have really wanted to try my hand at kayaking.

What a great day Keetha!
I can see you are getting quite adept at this creative thinking Grandma thing!
Starts to happen when Grandma and Grandpa's spend long periods of time caring for the wee ones!
Keeps us young or ages us quickly, hoping it's the latter!
Hugs,
Cindy

So much fun!!!! But that red dirt might just get the best of me. Come on down and visit our white sandy beaches......you can stay with me! We would have so much fun!

I know those grands had a ball and you are just the best Kamma!