If you already read this post, you might want to scroll down and read my NEW AND IMPROVED last paragraph.

A week or so ago I posted this picture of Fisherhubby's cherished egg: 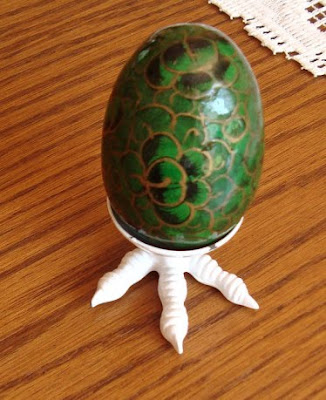 I said it reminded me of a comic strip egg, but could NOT remember the name of the egg character nor which comic strip it had been a part of.

In my mind it was connected to "Garfield," but I wasn't sure enough of myself to even suggest that. All my attempts to google failed.

Well, it is a mystery NO LONGER thanks to my friend, and blogger-on-sabatical, Joel.

The little egg character I remember was Sheldon, shown here with his brother Booker. Sheldon decided to stay in his egg after reading scary news stories in the papers lining his nest.

Both Sheldon and Booker lived in the Jim Davis "US Acres" comic strip along with their friends Orson Pig, Roy Rooster, Wade Duck, and sheep siblings Bo and Lanolin. I believe Garfield used to visit them at that farm from time to time.

If you never saw this cartoon strip because it didn't run in YOUR local paper, perhaps the reason it ran in ours was that Jim Davis was born right here in little ole Marion, Indiana.

What a hoot! I remember seeing that cartoon egg before, now that it's been mentioned :)

Hope you have a great day today and that the crowd enjoys your talk. :)

I have been reading Garfield for years and my children loved it and I do not remember that egg! But it's so cute! Your husband's egg is beautiful!

I don't remember the egg at all!

Oh of course. On the t.v. series Garfield not in the comics though I don't think.

I remember the egg. Cute.

I finally made a trip to Wisconsin -- just got back. It snowed one day, beautiful sunshine the next, then rain, and snow again on the day I left. What weather! I stood on the banks of Lake Wazeecha and took pictures. Nice.

That's some egg! And I didn't know Jim Davis was a Hoosier. That kind of explains a lot about his strip, though. ;)

About your header ... are those leaves from your neck of the woods? Wait -- not sure if I really want to know. I'm so jealous!