Colts Experience - The Fun and Festivities

.
Folks have been asking me if Greg and I went alone to the Colts preseason game. OF COURSE NOT! Our friends Steve and Vickie went with us. 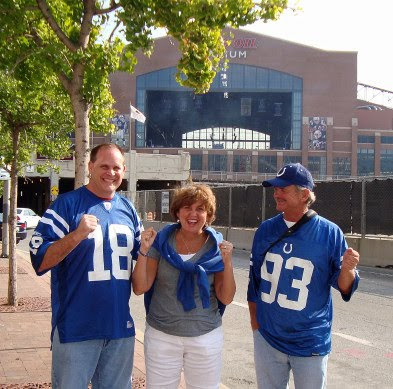 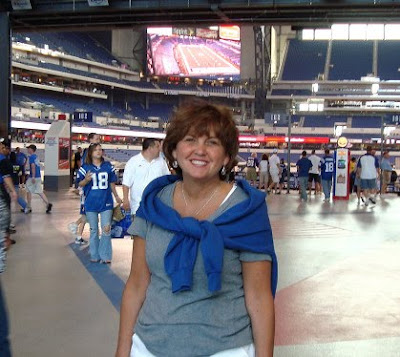 I loaned Vickie a Colts shirt so she'd have SOMETHING blue to wear - - - and like a good sport, she wore it the whole time, and even acted like she LIKED it. 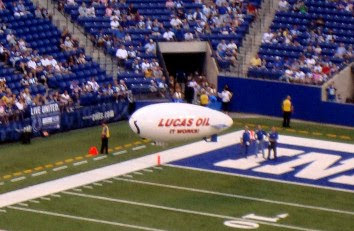 There were lots of pre-game "things" going on, like this little mini-blimp flying around the field. 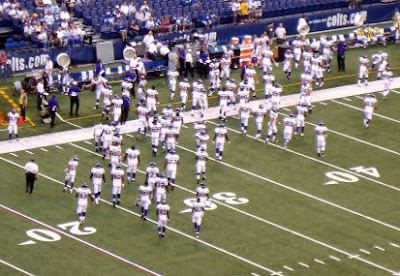 Finally it was time for the players to take the field. The Vikings came out without much pomp and circumstance - - - I mean, they WERE the visitors after all. 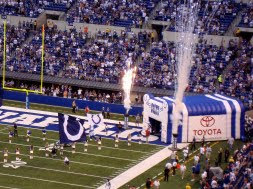 The the Colts ran out of their little tunnel with fire works exploding and flags waving.

Vickie and I remembered with humor the time my son Kyle ran onto the gym floor waving the school banner - - - oh but since you weren't there for that, you can't POSSIBLY know how funny IT was.

The Colts ran the "gauntlet" of the cheerleaders - - -

Then massed at center field. 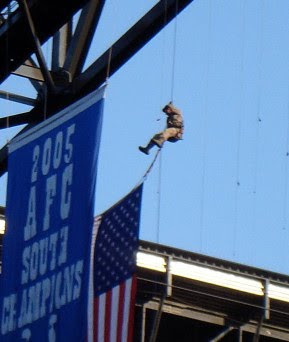 It was Military Servicemen Tribute Night, so two members of the armed forces - - - 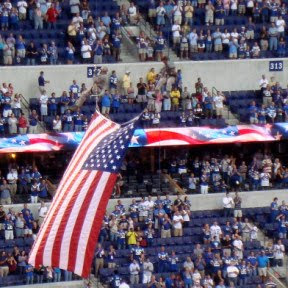 Lowered the flag in THIS creative way during the National Anthem. 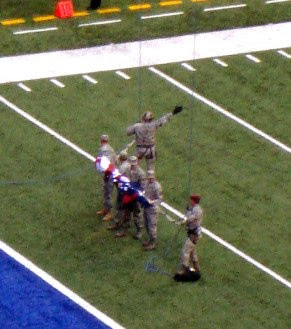 Men were waiting on field to roll up the flag and it never touched the ground!

Then it was time for the football game to begin. 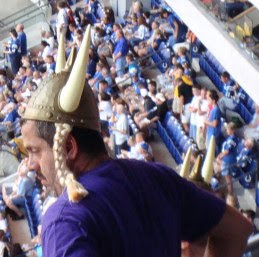 There were Vikings among us!!! 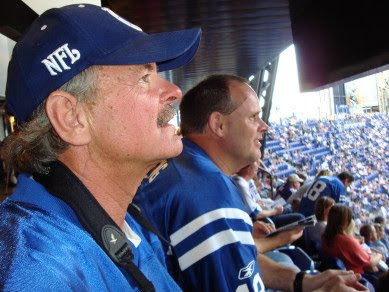 Greg and Steve looking down from our lofty perch. 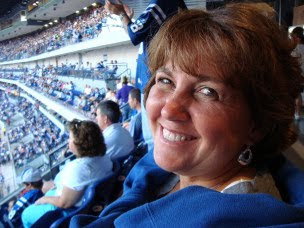 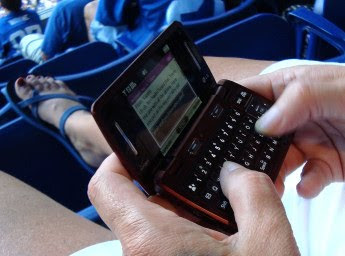 Though THIS is how she spent MOST of the game! 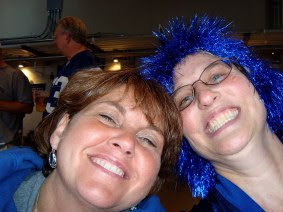 Here we are together - - -
A little self-portrait to PROVE I was there,
Blue Hair and all. 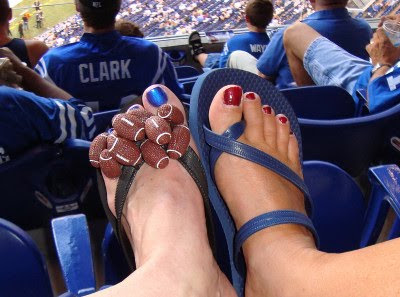 Our two feet.
Guess who belongs to which foot. 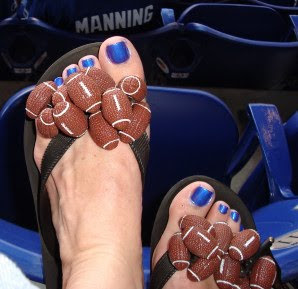 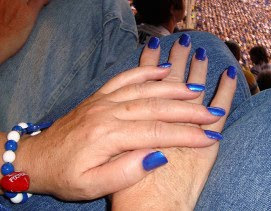 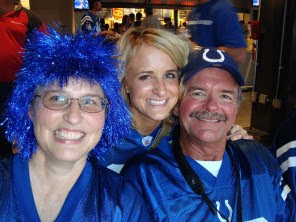 Korie was at the game and sitting one tier directly below us.
She came up for a little meet and greet
Complete with photo op.

She just shook her head at me and my mylar wig. 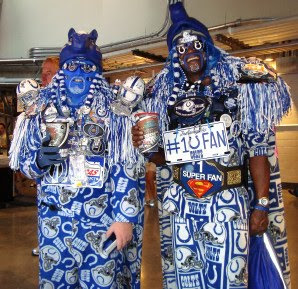 If you've ever seen a Colts game on TV
You may have seen these two "famous" fans. 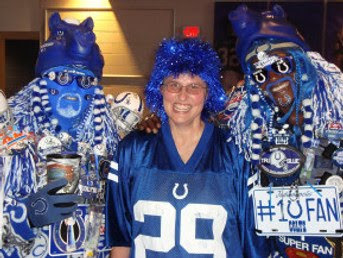 They may have been attracted to my blue hair,
I don't know - - -
But I DO KNOW they were more than willing
To pose with me for this picture!

It was a really fun experience and I thoroughly enjoyed seeing Lucas Oil Stadium.

HOWEVER - - - I don't want to go back for a REAL game. I need my wide screen TV and remote control for that!!!

Posted by Keetha Broyles at 2:47 PM

I WAS there to see Kyle wave that flag and it was pretty funny! HA

Ah you are a nut but I like nuts. Your friend didn't have a wig too? Poor sport.

The pics are great! Thanks for the all the re-cap. Vickie is so cute. Love both pair of flip-flops the 2 of you were sporting.
Glad you had fun.

K.B...while some people enjoy the experience, you live the experience!!! The blue hair does set off your nails!!! I think enthusiasm oozes from your pores... Ya know, they do make blue lipstick... That could be the next accessory!!!

I love those flip flops! Did you make them? But this is where we differ....you love the sport, I can tolerate it if I HAVE to. :)

The only NFL game I've ever been to was a pre-season game between the Atlanta Falcons and the Dallas Cowboys. I've been a Cowboys fan for a long time. Anyway our boys were little, and some guy behind us burned a hole in a brand new Polo shirt that one of them was wearing. Not a good experience.

Wow, you are the biggest fan. Have a great season. Keetha I just did a small blog for you. We just got home from vacation and thought I would post this for you to see.

Looks like a fantastic time!
LOVE the super fancy flip flops, btw.
Have a wonderful week!

You know fall is near when....

Keetha gets the football flipflops out!!!

Love those football flipflops! We've had the kids here the past two weeks with little time to blog other than post, I've missed it!

What a hoot! I had forgotten about the football footwear you owned LOL I think the two famous fans look SO much better in the presence of the blue mylar haired Keetha :)

How fun! You really embrace life and there is something to be said for that! You go with your blue wig - which is rocking - and those flip flops! This looks like all kinds of fun. And what you said about the service men and the flag gave me cold chills.

First SEC game is in less than three weeks. :-)

Looks like lots of fun!! I guess I'm going to have to keep up with the Cowboys now- same colors!!

Haha, that looks like it was great fun! One of the ladies I know here has a son who has been in and out as a reserve player for the Colts!

Wow, y'all are some serious fans. I'm not a football person, but it still looks like lots of fun to be there and be part of that. Love the blue hair. ; )

Keetha, you are the most fun loving, happy person I have ever known. Just think what our world would be like if we had more like you. Do not change, and keep on enjoying life to the fullest.

1. You and Vicki have a son named Kyle?
2. I'm jealous that you got a picture with those fanatic colts fans because i didn't.
3. You haven't blogged in forever... are you dead?

Not dead - - - - back at school experiencing a few "adjustment" issues.

So, you did go back to school? Well, I am sure they were glad you did for the continuity...as well as other reasons I'm sure! Have a good year!

Best of luck to your Colts. Hubby and I decided we wanted a pro team to pull for (NOT that the Crimson Tide isn't enough for us). We chose the New Orleans Saints since they are fairly close to us. I don't think I will be quiiiiite the fan that you are though :)

Love the flipflops, and the nail polish. the pic with the guys, the exit sign looks like a red pompom. HA! :P