Rerun: "Of Bottles, Boys, and Blessings"


.
I'm still struggling to learn how to do things on my loaner Macbook, so instead of posting fresh new material with current pictures I am reposting something from the distant past in the hopes that it will capture your interest and keep you visiting my blog!

Our oldest son inherited my never-meet-a-stranger gene and his dad's adrenaline-loving-risk-taking gene.  Sometimes that makes for a very dangerous combination.

Yesterday, while on a skiing trip in Michigan, he skied off the beaten trail and over a cliff breaking one rib, stress fracturing two others, and sustaining a pulmonary contusion.

After being rescued by the ski patrol, being taken by ambulance to one hospital, and driven to a second by his wife, I am very thankful to report that he lived to tell the story.   Albeit he's a very sore young man today.

Thinking of that made me remember so many hair raising-escapades in which he was involved as he grew up.  This rerun post is about one of those.
.
.

Of Bottles, Boys, and Blessings
.
. 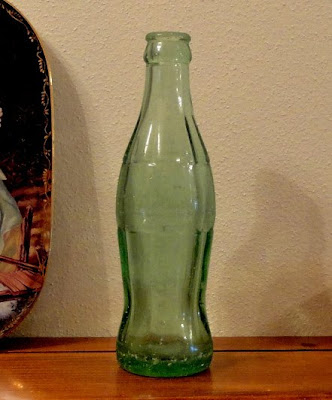 I have this little Coke bottle on a shelf in my kitchen. I've had it for more than 20 years. It is the size of coke that cost 5 cents when I was a child. It is chipped, nicked, and scratched. Still, it managed to survive the "purging" I went through when we made our recent move.

I'm not exactly sure WHY I kept it all these years. I'm sure its condition renders it nearly valueless. 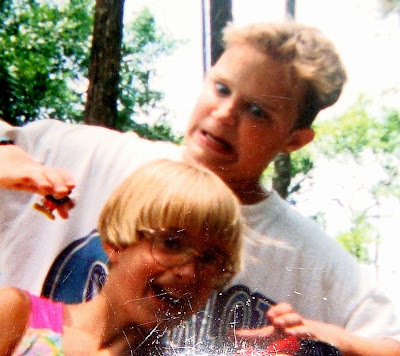 When our oldest son Kelly, shown here about to put his little sister out of her misery forever, was 11 or 12 he had a friend named Stephen that used to spend long hours at our house.

On several of those occasions, the two boys rode their bikes a few blocks to the River Greenway. At FIRST I thought they were simply riding their bikes. When they came home all muddy and wet, I realized there had been more of river and less of greenway in their afternoon.

I thought nothing of it other than boys would be boys and the call of the wild and the water was more than they could resist. Muddy clothes could be washed. I gave them stern warnings to be very careful to stay in shallow water.

Soon, they began to bring home "treasures" from their river visits, treasures they dug out of the muck in the river bed - - - stones, broken glass, and bottles. My little green coke bottle is one of those treasures. I have NO IDEA what happened to the REST of their collection, but I liked this bottle and kept it.

Kelly is now an adult, is about to bless us with our first daughter-in-law, and is still fascinated with water, boats and bottles. Together. At the same time. His boat on the water, and I'll let you guess about the rest.

He safely navigated and survived the "water" of all the years of his adolescence.

His older sister, the mother of our wonderful grans, still lives in the same town with that river, that mucky river bed, and that greenway. Her husband is a policeman there.

A few months ago, the police were called to that river bank. Not to the exact spot where Kelly and his friend Stephen spent so many happy hours - - - a little farther down under "the bridge." Seems some OTHER children had found the allure of the river irresistible, only with tragic results. Two of them fell into a hole and drowned.

The MOMENT I heard that news, my mind flew back to two tousled, blond-headed boys who somehow managed to escape that fate, and to the mother who allowed them to play at that river. 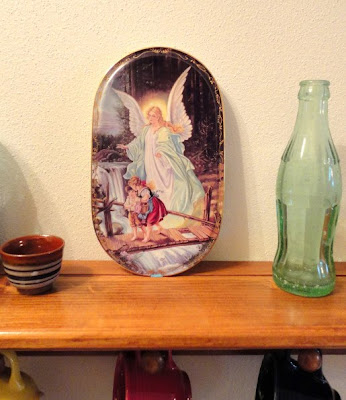 Now the coke bottle takes on more meaning than ever. It is a reminder of the protection, care, and blessing that were given to two young boys by a guardian angel when neither they nor their mama realized they were even in need.

.
Today I'm joining Unknown Mami
For Sundays in My City.
My city is Wisconsin Rapids, Wisconsin
.
Please hurry over to Unknown Mami's to see
What others are sharing from their cities.
.
.
Posted by Keetha Broyles at 10:39 PM

I thought this post was going to have a different ending like two other boys found something cooler than a coke bottle. Thanks for sharing.

Oh goodness, we played around near 4 mile creek when growing up. The summer after 6th grade a boy drowned. A boy at church was swimming with him and survived.

What an amazing story behind a bottle treasure!

What a touching story Keetha!
It reminds me of so many times my Mom would say she was praying to our guardian angels.
I was always hoping it worked!
See you soon,
Cindy

Glad your son is safe from his latest adventure skiing! Amazing what our kids survive and makes me all the more aware of how gracious God is to look after them when we aren't around!

Keep hold of your faith, your son, and if needed, that Coca Cola bottle. Disqus is acting up but there are replies to your recent comments over the past week at the Gumbo blog.

Goodness! That ski trip will be one he won't soon forget. I'm glad he is okay, relatively speaking. What a neat story to go with that Coke bottle!

It didn't escape my brain that your son is in a world of hurt and pain right now. I am glad he is alive!!! We watched some snow boarders yesterday doing stunts and such on a mountain and thought "oh, their poor mothers!" Praying for his healing.

Sorry about the skiing accident, but the guardian angel story is so, so true! One of my boys was on a first name basis at the ED, but I know the guardians were kept pretty busy with my guys and girls!

I am thankful and blessed.

Oooh, how awful for those boys and how blessed you must feel to have your son safe from the waters and now through his accident. Praying for a fast healing for him!
sandy ;)

Keetha, if I could afford it, I would buy you a laptop.


I love the story behind the bottle and I also love the picture of the guardian angel. I grew up with that picture in my bedroom and it always made me feel safe. I am no longer religious in the same way, but I still love that image (I no longer own it) and it always makes me feel good when I see it.

And now all this time later since you first posted this, there have been even more drownings in that river! And I think about this all the time and how the Lord protected us...especially Kelly...on our adventures in that river.

That story had my heart beating faster. God bless your son, Keetha. I'd keep a keepsake too! What a precious memory. Thank you for sharing!