It's That Time on the Soon to be Frozen Tundra 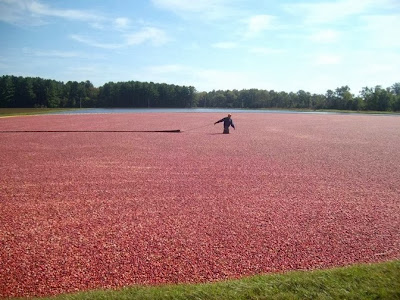 You may think I refer to Fall when I say "it's that time" but that would not be precisely correct.

What I refer to does of course happen in the Fall, but I'm referring specifically to cranberry harvest time.

Cranberries are very important to our county and to our state.

This county previously was known for paper and cranberry production.  Sadly, paper production has dropped off due to various factors like the death of "Look" and "Life" magazines and the outsourcing of paper production.

Thankfully, cranberry production is on the rise.  This little county produces more cranberries than anywhere else in the United States or even the world.

Harvest is an awesome time.
.
. 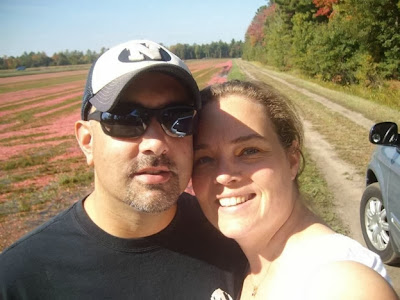 A few days ago, my friends Shawn and Stephanie took their three youngest children out to look over the beginning of harvest.

Shawn has himself worked on the marsh (as cranberry bogs are collectively called) until he went into law enforcement.  His dad retired from the marsh, though why he says he's retired I do not know as he still spends plenty of time working out there.  One of Shawn's uncles is a current marsh employee. 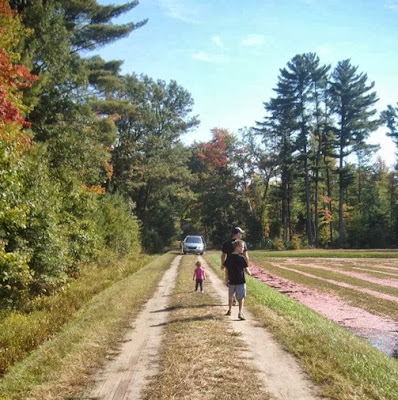 So it was that on a particularly fine Fall day last week, Shawn and Stephie took their children out to "check" on the cranberry harvest, which was just beginning.

In the above picture you can observe one of the access roads used to reach the bogs.  A bog is a bed in which the cranberries grow.  You can see a bog, with some red from the cranberry hue, on the right side of this photo.

That particular bog does not appear to be flooded as yet for harvest.

Because of the popular Ocean Spray commercials, some folks who are unaware of cranberry growth and harvest think that cranberries grow underwater.

This is not the case.  They grow in hollowed out rectangular bogs which are NEAR a steady supply of water - - - usually in a marshy region.  The water is used to keep the plants/berries from freezing when the temperatures dip below 32 degrees.  At times like that they are continuously sprayed with water as liquid water is not yet frozen and will protect the berries.

When harvest time comes, the bogs are completely flooded with water to assist in the harvest process.  This results in the images you are used to seeing in the commercials and which I have shown at the top of this post.

Once flooded, the berries are gently "loosened" from the vines at which time they float freely to the surface.
.
. 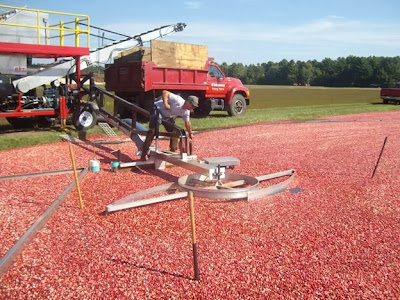 Once floating on the surface, they are corralled to one end of the bog with large floating booms.  From there they can be gathered into the back of waiting trucks.  The water is gently shaken off the berries as they ride up a conveyor belt.  Any flotsam is separated away from the berries to the bed of one dump truck while the berries are taken the other way into a delivery truck.
.
. 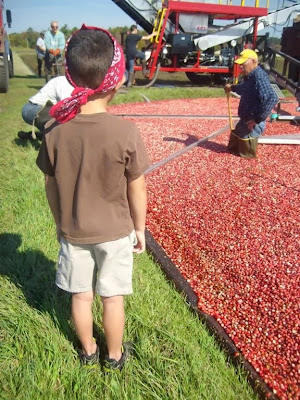 Little Jessie, seen here in his cranberry bandana, is only 5.  I don't know how much of previous harvests he can remember, though he is fascinated by this one.
.
. 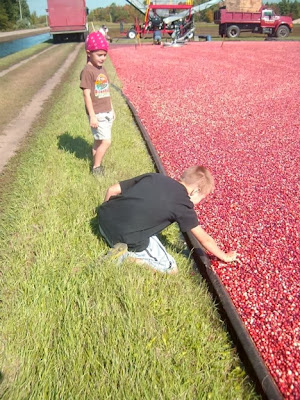 Fortunately for Jessie, big brother Dane is in 5th grade and is an excellent guide, explaining all the ins and outs of the harvest.
.
.
Posted by Keetha Broyles at 3:22 PM

Glad you shared the story of cranberries. I dearly love cranberry sauce and salads. Did not know about what you shared.

This is so fascinating! I would love to witness a harvest. Glad you're back!

Why didn't I put this on my calendar???? It was on my to do list for this fall and I completely missed it AGAIN. Darn. Such an amazing process!

Fascinating!! Thanks for sharing! I am going to pin this on my homeschool page because I don't know that I have ever known much about cranberry harvesting or growing. What a great heritage of your county :-)

WOW! So it's just like in that cranberry commercial!? Great informative post, thanks for sharing. Guess, what? We might move to Manistee, MI possibly next Summer. :)

I remember coming over near Rapids when I lived in Point and watched them harvest cranberries...Love then..Very interesting watching them
flood the bogs...I think WI. is the largest producer or used to be of the cranberry....
Love from NC

I saw that first picture and knew it was cranberries. We visited one about 40 years ago in Wisconsin. Love the photos.