.
We interrupt our regularly scheduled blog posts to bring this special news bulletin. 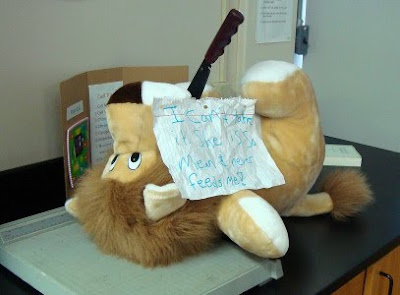 We have just learned that there was an attempted lionicide in a high school science lab near here today. 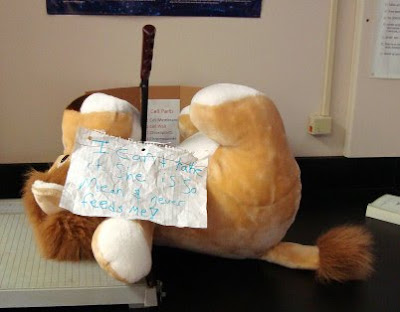 Apparently the class mascot was a bit disgruntled over his living conditions and threatened to remove himself - - - PERMANENTLY- - - from the lab. 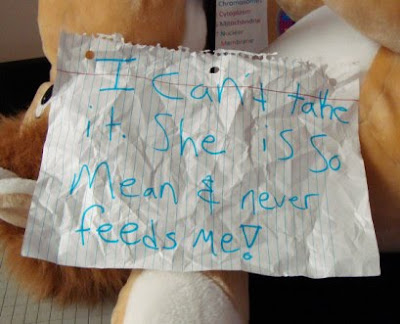 In an heroic rescue attempt, the science teacher pulled him from his would-be guillotine, soothed his ruffled mane, fed him some animal crackers, and restored him to his rightful place as King of the Lab.

As this reporter left the scene, she heard the lion say, "Evan made me do it."

Absolutely no stuffed animals were harmed in any way during the production of this post.

You are too funny!

Uh oh...he didn't eat any lion animal crackers did he?
Mind you I have read a book entitled Now I Know Why Tigers Eat Their Young so I guess the lion might feel the same way about it's teen children.

Your students must love having you for a teacher. They probably ask even better questions these days. Back in the mid '80's after the birth of my third son, one of my students politely asked, "Mrs. Beaumont, are you going to have any more babies or did you get fixed?" I'm sure you could have made a science lesson out of that.

Glad you were able to rescue the lion...how did Evan make out?

PETA is gonna be all over this!

How funny your students must be and how comfortable you must make them feel!

Not to ask another stupid moon question, but I'm doubting myself now.....full moon last night.....so is the moon now going to be waning? I need to know because I want to get the dogs a hair cut!